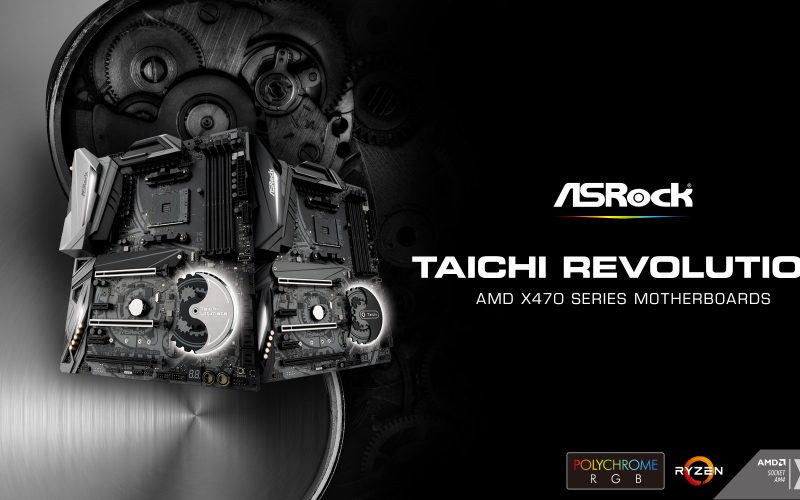 In this review, we look at a new motherboard from ASRock, this time with the X470 Taichi. A motherboard that positions itself in the high-end range of X470, nicely built motherboard really and good looking is what it screams. I specifically say high-end, as ASRock designed something nice here, but priced it accordingly as well in a €229,- (similar in USD) you get the benefits from the X470, and overall a very nicely built motherboard really. X470 offers a more fine-tuned experience for your Ryzen Gen2 processor.

Ryzen Generation 2 Zen+ was launched in April, aka Ryzen 2000 or 12nm optimized Ryzen processors, the ‘refresh’ SKUs so to say. The new 12nm Zen+ processors will work fine with your X370 chipset based motherboard and vice versa, however, AMD launched the X470 chipset alongside these new Zen+ processors. The new chipset offers small improvements in combo with the new 12nm products. For example, to better facilitate XFR2 options. It has been a year already ever since AMD launched the first generation Ryzen processors. It had a bit of a rocky launch with the inter-core latency discussion a 1080p gaming performance as well as memory support. But the tide definitely turned for AMD as more and more people are considering to purchase an AMD processor-based PC, for their next purchase. The memory compatibility issues are mostly all gone, of course, we’ll look at game performance in this article as well. But yes, things are looking good. The new 12nm processor generation can be clocked a notch higher. The upper range frequencies at 4.2~4.3 now are feasible, that also means that on the lower end of the spectrum, AMD is now capable to increase base-clock performance ion the more high-end parts. All these little tweaks bring the benefit of an overall faster processor series. Add to that improved memory latency and improved XFR2 ranges and you’ll notice that the new ZEN+ generation now has become a really viable and more competitive product. So the ones that have not made a move towards AMD Ryzen just yet, now potentially could or will.  So if you go with a proper processor, you’ll like want a proper motherboard as well eh? X470 will give a home to the new Zen+ procs, with socket AM4 and will provide faster DDR4 memory support (as well as all other modern usual suspects like USB 3.1 gen 2, SATA Express, as well as NVMe protocol based M.2 support and surely PCI-Express Gen 3.0). 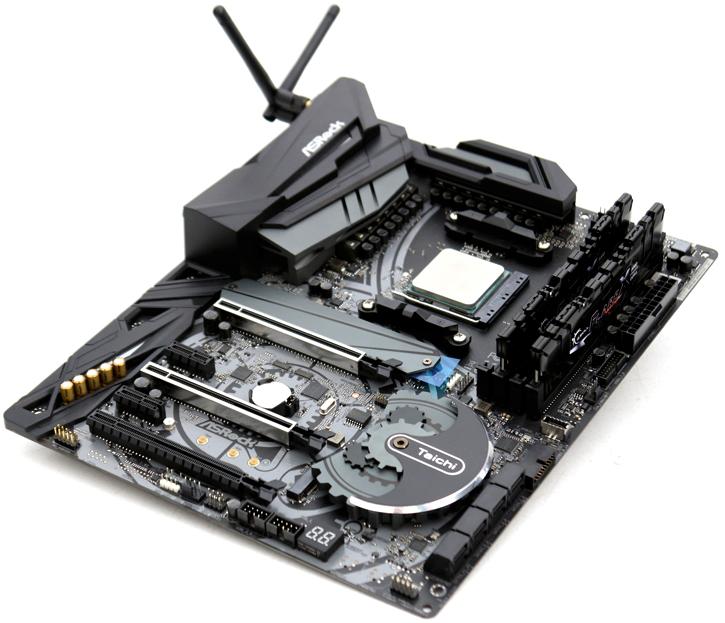 Today’s tested motherboard, the X470 Taichi from ASRock, is based on the X470 chipset and thus its feature set. Like almost all X470 boards, the taichi includes support for two M.2-NVMe SSDs slots, one full speed, USB 3.1, as well as offering support for two-way SLI and CrossFireX configs. The board has a dark styled PCB comes with shielding on the two primary PCIe slots and the inclusion of what ASRock calls, Polychrome RGB, which is a subtle light accent RGB setup. Features wise you may expect triple x16 PCI-Express slots (16x/8x/4x), an 8-channel audio solution, the usual quality components and USB 3.1. Audio is based on Realtek 1220. Combine this motherboard with the Ryzen 2000 series six or eight-core processors and you’ll be pleasantly surprised as to what it offers. Let’s start up the review.